Why? What makes a city enticing for entrepreneurs and innovators to be there?

Home - Innovation - Why? What makes a city enticing for entrepreneurs and innovators to be there?
25May

Why? What makes a city enticing for entrepreneurs and innovators to be there? 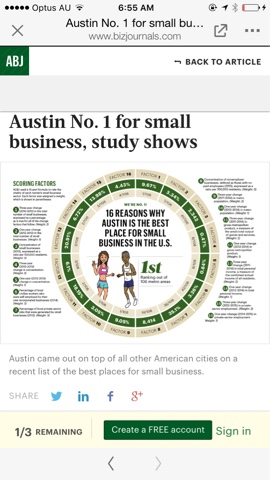 Austin was cited best city for a business to startup in USA , And ranks No. 6 among U.S. cities for fostering entrepreneurial growth and for its readiness to shift to the digital economy, according to a new report by the U.S. Chamber of Commerce Foundation, 1776 and Free Enterprise.

It rated  number 5 in access to available workforce.
In the Innovation That Matters report, Boston ranked No. 1 followed by the San Francisco Bay area, Denver, Raleigh-Durham and San Diego. The 35-page report studied 25 U.S. cities.
Why? What makes a city enticing for entrepreneurs and innovators to be there?
Culture
In city culture, meaning the correct “mindset and lifestyle” to attract entrepreneurs, Austin ranked No. 5. Raleigh-Durham topped the list for culture.
Response to technical innovation
The way cities respond to technological innovation will play an important role in deciding which localities become leaders in the future, the authors write.
“Geographically, the digital economy is not advancing consistently across the country,” the report says. “It is concentrating in cities: densely populated and highly connected urban centers where people can work together closely to share and discuss ideas, build and test new products, and bring companies to scale with access to large pools of customers.”
It recommends that local officials do four things:
1. Understand the trajectory of the digital economy;
2. imagine a future where technological possibility intersects with legacy assets and strengths;
3. focus beyond startups to include corporations, universities, nonprofits and local government;
4. work toward a new governing framework that combines technological possibility and regulation.