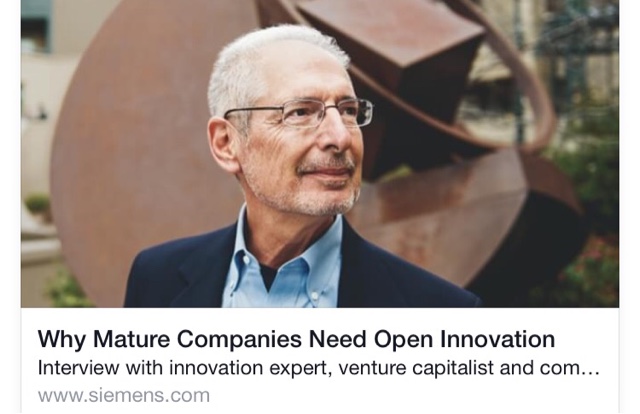 Large companies have to learn to operate ambidextrously, and continue to pursue their core areas of expertise while experimenting elsewhere. Many companies have already started to go this route by acquiring start-ups. In our interview, Jerome S. Engel explains how large companies and start-ups can help one another to promote innovations.

Professor Engel, in 1980 you moved from the northeastern U.S., which is dominated by large companies, to San Francisco and Silicon Valley. What were your impressions?

Engel: When I arrived in Silicon Valley, the revolution of the personal computer was in full swing. Many companies were involved in this wave, big companies like IBM and success stories like Apple — and all kinds of start-ups. There were lawyers who knew what the needs of these garage companies were; there were loads of inventors and venture capital providers. Silicon Valley was — and still is — a very lively ecosystem. One thing I noticed was that all the companies there shared an urge to dominate new and growing markets. They didn’t think regionally; they immediately thought globally. From the very beginning, for example, the design company Autodesk, which I helped found back in 1982, wanted to create design software that would be used around the world.

Is it possible for large, established corporations to be as innovative as the start-ups you describe?

Engel: No, not in such a disruptive manner. Innovations, such as the ones developed by start-ups in Silicon Valley and elsewhere, don’t fit easily into the relatively rigid structures of large companies, because they rely on constant experimentation, and they’re accompanied by a lot of uncertainty. For a long time, on the other hand, the innovations supplied by established companies have been incremental, consisting in small steps. They generally only improve on what’s already successful. As a rule, a corporation will also take care not to promote innovations that undermine its own business model. To make up for this, however, large companies are masters at putting plans into action – whether it be improving their products, manufacturing them efficiently, or global sales and marketing. If companies manage to use this backbone to take a more playful approach to innovation in individual fields — and pursue a strategy of relying on their strengths for support while taking some risk — then they can be very successful too. But courage is needed to take that step.

Aren’t there also fields of innovation that simply can’t be served by start-ups?

Engel: Sure. An example would be nuclear technology. Commercializing that is not at all a straightforward matter; it’s extremely capital intensive; and it’s subject to very stringent national and international regulations. Another field is automotive technology. But there are exceptions here too. As you can see in the case of electric car maker Tesla, a start-up can be successful in this area, if it doesn’t have to show deference to any existing business models — and has the necessary startup capital, of course.

Innovations, such as the ones developed by startups in Silicon Valley and elsewhere, don’t fit easily into the relatively rigid structures of large companies, because they rely on constant experimentation, and they’re accompanied by a lot of uncertainty.

But established companies and start-ups can benefit from one another, as is the case with so-called open innovation models.

Engel: That’s right, corporations and start-ups can complement one another with their own particular strengths. But there is still room for improvement in the open innovation model with regard to the interaction of large companies and recently established market participants. Large companies have to learn to operate ambidextrously, and continue to pursue their core areas of expertise while experimenting elsewhere. Many companies have already started to go this route by acquiring start-ups that might not involve their core business and letting them operate largely on their own. Siemens, for example, does this very well with its Technology to Business (TTB) centers in Shanghai, Munich, and Berkeley. Whenever new technologies or new trends emerge whose development holds great potential, the TTBs’ scouts are on the lookout for start-up companies that may be of interest to Siemens. This way, the company ensures that promising innovations from all sources, whether developed inside or outside Siemens, can be developed into new products and services to power their business. There has to be room in established companies for this kind of true open innovation.

Everyone thinks of Silicon Valley when it comes to innovation in the digital age. Many have tried to copy it, but so far, no one has been as successful as the original. What characteristics of that innovation cluster can be transferred to other places?

Engel: Silicon Valley is not the only innovation cluster, although it’s a very successful one. There are also innovation clusters in Israel, Germany, Taiwan, and other places. They all have similar characteristics. And that goes beyond just a certain set of components and players, such as start-up founders, venture capitalists, and established companies. These ecosystems are characterized above all by a certain behavior: highly mobile resources, money, people, and knowledge. Think, for example, of Mark Andreessen, who founded the web browser company Netscape and is now a venture capitalist. The people involved in Silicon Valley are constantly striving to create and drive forward innovations that have the potential to change the world — and they are willing to experiment and also fail. And ultimately, they’re pursuing goals that they can’t achieve alone but only collectively. Entrepreneurship and innovation are the order of the day here, and it can pay off in a big way for many — not just those at the top. the Twitter IPO created about 1,600 millionaires at one stroke; the Facebook IPO over 1,000. Add to that the ripple effect as that wealth is consumed and you can see that it can have a massive effect in terms of energizing and motivating an entire community.

Venture capitalist, company founder, and university professor Jerome S. Engel is an innovation expert and senior fellow at the University of California at Berkeley, where he established the Lester Center for Entrepreneurship in 1991. He has also founded start-ups, including Internet company Allbusiness.com, which has provided support to young companies with information and helpful links, and was acquired by TV broadcaster NBC in March 2000. Today, he manages a venture capital fund with a partner. In recent years, Engel has been devoting much of his attention to innovation clusters, which tend to differ from regular industrial centers in their dynamism and willingness to call into question established business models. Engel edited the collection of essays titled Global Clusters of Innovation: Entrepreneurial Engines of Economic Growth around the World, a 409-page volume published by Edward Elgar Publishing Ltd in late 2014.