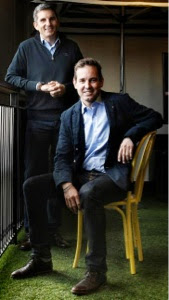 In 1997, Mr Petre started ecorp for Kerry Packer’s PBL with $30 million capital, floating the subsidiary six years later for $385 million.
He then teamed up with Mr Blair and former eBay Australia managing director Alison Deans to form netus, a $40 million fund half-owned by News Corp, producing an internal rate of return of 63 per cent on investments.
AirTree will look to invest $2 million to $5 million in about 15 businesses across the fund over 3 years.
“In netus, we did nine investments, seven of them returned between three and 22 times, and only two didn’t make money, so that is the kind of rigorous approach we will take now.”
Airtree are looking for businesses that demonstrated signs of traction in the market, and said they could sit in any number of sectors from e-commerce, media, retail and financial services, through to education and health.
Other VC Funds include
– OneVentures started raising $100 million
– Blackbird Ventures
– Square Peg Capital  – Bassat, Liberman and Packer fund
– Montech listed fund – David Shein and Geoff Levy’s recently listed fund merging the skills of Monash and Comtech!!
– telstra’s Muru-d – run by Mick
– and then there is Fishburners – who have just done a deal with Google
And it looks as if their will be more coming to the table!!! Watch this space .
Hitech and startups  seems to be an interesting space at the moment!!