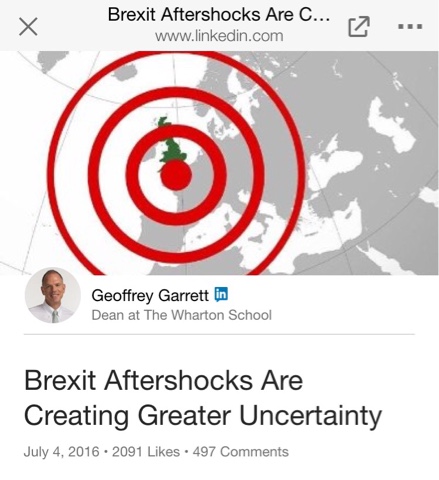 There is 1 certainty –
Uncertainty fucks with our sharemarkets
There is another certainty – is that there are sharemarket cycles!
There is a contagion of Brexit aftershocks. The more uncertainty and the longer the uncertainty –  Investors hold cash and wait – markets go down
The contagion of the thought of an Australian hung parliament –
Investors hold cash and wait – markets go down
The resignation of the Cameron and Boris Johnson standing down as candidate – Investors hold cash and wait – markets go down
The Governor of the Bank of England, Mark Carney, made the extraordinary statement that the UK is suffering from “economic post-traumatic stress disorder.”
Is same when Paul Keating  said
“Australia is a banana republic”
When our own leaders criticises our country – what do our citizens think?
A country needs a strong leader
– A leader we can trust and be proud of
– A leader that has a solid vision and can handle the shit  that is flung – brexit, crashes, wars, ideologies
the pain uncertainty inflicts can be immense.
However – is this a good time to buy?
Economics Is about risk and return
– Higher risk – higher return
When the Japanese invasion threatened Sydney Harbour in the Second World War  – savvy investors bought up Sydney Harbourside land – and are now one of the richest landowners in Sydney.
If the fundamentals solid and the opportunity still exists – buy low and sell high!
Or follow a rising tide or sell in a down turn?
In the crash of 2008 –
Banks called in loans –
– businesses were acquired for cents in the dollar
– People who bought cheap assets ( USA property) did well
It was a call for change –
What was the aftermath of 2008 – Washington and the world reacted quickly and decisively to end the uncertainty. The US bailed out the banks. Central banks cut interest rates to zero. The G20 and Australia committed to massive fiscal stimulus.
Those who won were those who
– had a clear vision
– Had ++ knowledge
– had the balls to take action
and
– acquired distressed assets
Is this the end – or is this just a low phase in a cycle?
My view – is to take the advice of my late grandfather – buy low and sell high !