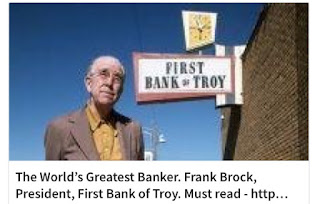 Frank Brock, President, First Bank of Troy, Idaho
An Extraordinary Email
Bob Hemmings is one of the great men of direct marketing. Now in his 90s and proprietor of the Hemmings IV Direct agency in Pasadena, Calif., Hemmings is dapper, intense, powerfully built, immediately recognizable with his Adolph Menjou mustache and bone crusher of a handshake.
In his younger days, an employer of Hemmings was Frank Brock, president of the First Bank of Troy, Idaho. Troy’s population in 1960 was 514;
Brock’s bank had 6,000 active accounts—12 times as many people who lived in the town. He had customers in 45 states, and around the world as far away as Pago Pago, American Samoa.
What was Brock’s secret?
Hemmings recalled that Brock knew precisely what business he was in.
“I am in the financial services business to help provide finances for my customers—from the cradle to the grave,” he said.
Brock once made a loan to a man who had robbed the bank five years before. He was caught and served three years in prison. Brock said: “He has learned his lesson. I don’t hold past mistakes against him. He is a much more stable individual now.”
According to Hemmings, Frank Brock knew practically all of his customers by their first names; whenever a good loan customer ran into financial difficulty, the bank carried him—without dunning notices or pilling up interest charges—until he was back on his feet.
Brock’s entire day was spent in his office going over his list of customers and clipping newspapers. Whenever someone would marry, die, move away, give birth, etc., he would send a remembrance. All of his customers received a personal note or a telephone call at least once a month from Frank Brock. The current buzz phrase for what Brock did:
Continuous Event Marketing.
When the child of a customer reached a certain age—let’s say seven—the kid would receive an invitation to come to the bank with his parents. There he would be greeted at the door by none other than the bank’s president, Frank Brock, and given a formal tour of the facilities (the vault was a favorite).
Whereupon, the family was brought back for a welcoming chat in the president’s office.
At the end of the conversation, Brock would take out a brand new crisp $1 bill, present it to the child and then lead the little tyke up to the teller’s window. With great ceremony, the child would give the teller his new dollar and the teller would present Brock with a savings account passbook. Brock, in turn, would present it to the child with a flourish.
Later, in high school, the kid would open a checking account. Later still, this young man would go away to college … go into the Army … get discharged, and get a job in a distant town or another country. But he always kept his accounts at that original bank.
He knew the president. If he ever needed to borrow money, he could do so on his name alone. If he ever needed cash, it immediately would be wired to him, no questions asked. If he ever moved back to town and wanted a mortgage, it was a piece of cake. Wherever that kid was in the world, Frank Brock was his personal banker.
Hence 6,000 active accounts in a town of 514.
Years later, Hemmings phoned the bank. Frank Brock had long since died, but Hemmings got the chief cashier on the phone with whom he had worked with many years before. The bank had been bought out by a larger bank.
“Is the new president still going over the customer lists the way Frank used to?” Hemmings wanted to know.
“Aw, hell, we’re so busy with paperwork and dealing with the computer—nobody has time for customers anymore,” the chief cashier said, and then added, “but, you know, maybe we should.”
An Email from Mrs. LittletonI was so glad to see this article that you posted about the Bank of Troy. I went to jr. high, high school and college at Moscow, Idaho. I just thought I would add to your story.
I certainly would like to see this kind of attention return to the business world! I know it was what my father taught as the Dean of the College of Business at the U of I.
Here’s another story … when we moved to Moscow, Idaho in 1971, it was recommended that we go to the Bank of Troy for the mortgage of our new house. I remember walking in with my parents and we were introduced to the president of the bank. After a friendly exchange, my father shook his hand, and we had the money for our house. No papers were signed at that time … unheard of now. My parents kept their account there nearly their whole rest of their lives.
And another interesting note — we traveled on vacation from Idaho to Pennsylvania, I believe in the early ’80’s. My mother loved antiques, so when we spotted an interesting store, we stopped. After shopping a while she acquired a couple hundred dollars worth of antiques, but when she pulled out her check book the business owner said he didn’t take checks … and then jokingly added, “unless you bank with the Bank of Troy because that is my bank.”
My mother exclaimed, “We wouldn’t bank anywhere else!” and he cheerfully took our check with no questions!
So yes, I can believe, and know first hand, of people who had accounts that didn’t live there. I sure wish we could still have some local community banks like that again. I know my father said that we never had any trouble with our accounts because of the two little old ladies who were the bank’s accountants. “Never had any trouble until things started being handled by computers!”
Keep up the good work!Mrs. Littleton