check out the video on SMH Link
Audience member Pete Cooper set the tone for the evening on Q And A last night , after he interrupted Assistant Minister for Innovation Wyatt Roy to demand the dollar figure matched the ambitious rhetoric – for Government support of innovation and start ups.&nbsp;
“Why aren’t we supporting [start-ups] in the budget statement and innovation statement? Why are we doing slow lane innovation strategies?” Mr Cooper asked.
Assistant Minister for Innovation Wyatt Roy said Australia could be a world leader in innovation. The Turnbull government announced its $1.1 billion national innovation and science package in December under the slogan “Welcome to the Ideas Boom”.
Mr Roy spoke of his deep optimism for Australia’s future as a global leader in innovation.&nbsp; 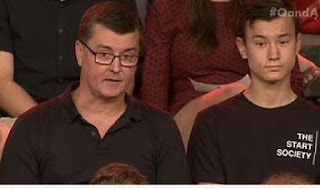 Pete Cooper, left, questioned the government’s financial commitment to innovation. “We have to create something that is uniquely Australian,” he said, arguing our lifestyle would attract the “best and brightest” to our shores.
Wyatt spoke of the need for a “cultural change”. “We need to embrace more risk, we need to accept failure, we need to celebrate success,” he said. 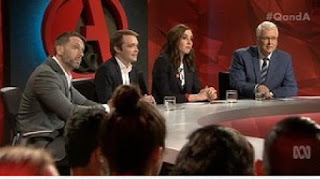 Part of the ABC Q&A innovation panel. Photo: ABC Q&A &nbsp;
The secret is sparking the desire for private enterprise to invest in innovation and startups&nbsp;
“Really, you know, Uber’s doing four times what you put over four years in four months.” Host Tony Jones also seized on the funding discrepancy.”Samsung, one company, one year [will spend] $18.6 billion in research and development,” Jones said.”Compare that to $250 million a year the government has put out,” he said.&nbsp;
Mr Roy told the Q&A audience the real success of the government’s role in supporting innovation would be how well it generated private sector involvement.&nbsp;