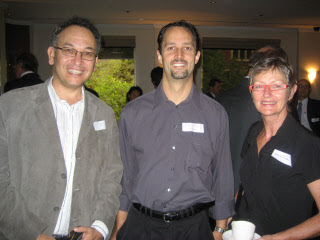 Smart Company – Tuesday, 20 February 2007 By Amanda Gome
Ivan Kaye is a rare breed in Australia. The former accountant runs advisory company BSI and two venture capital firms, ADI and Information City. He chooses to invest small amounts of money in high-risk start-ups in hot new industries, a space ignored by most venture capitalists in Australia.
He tells SmartCompany how … and why he invests in emerging technologies.
“I am into innovation. All the fun is investing in early-stage companies because after that it becomes different – full of managers, accountants and lawyers. I am also an entrepreneur. And you can’t invest in start-ups with five people unless you are an entrepreneur and have run a start-up with five people.
“At present we invest between $50,000 and $300,000 in a start-up. We specialise in web 2.0, wireless, software, ASPs, new media and mobile applications. Very few people invest in Australia at such an early stage so many people come to me and ask for money.
“Often they’ll say, ‘I have this great technology and I need $3 million’. But they don’t need $3 million. They need relationships, grants, programs to help them commercialise and get to the next step like COMET (the Federal Government’s Commercialising Emerging Technologies program) and Export Market Development Grants. We get the companies ready for a fee (usually between $1000 and $100,000.)
“If the guy is right and the chemistry is right, we invest. Initially it might be $50,000 but if the company needs more – like $700,000 – we will get co-investors. Of the $3 million we have invested since we started in 2000, we have raised $35 million in co-investment.
“Often entrepreneurs just need ideas. I just had a great session with Rex Hunt. He asked me, ‘How do I take my brand worldwide? Why not go fishing with a star like John Travolta and get him to tell you his life story and put that on primetime TV?’
“My biggest tip to entrepreneurs? Avoid indecision. If you can’t make a decision you are in limbo. So it’s better to make a decision even if it’s the wrong one. At least you learn by that.

Don’t sack the entrepreneur
When the business is so small, it will not survive without the entrepreneur. Once the business starts making decent sales, of $5–7 million, that’s when you start to think about replacing the entrepreneur with a management team because the business needs new skills at that stage.
“If we invest in 15 companies, we’ll get seven to the stage of needing $1–3 million and then four of those to the stage of needing $3–6 million. When they need $12 million we’ve made our money.
“Our biggest success was investing in digital company Quickcut, which was worth about $750,000 10 years ago and recently sold for $50 million.

Is it a world-first innovation?
“When someone comes to see us with technology they often claim it is a world-first. What do I know? I am an accountant. But I know all the experts. If it’s wireless, I ring Walter and I say what do you think? There is always something similar being developed somewhere so being first to market isn’t everything. It’s usually innovations that are second or third to market that make all the money.
“So many venture capitalists take the attitude in Australia that they love the technology but to take the company forward, they want to sack the entrepreneur. But if the entrepreneur is committed to making it work, mostly it will work. And I have rarely seen a business work where they have sacked the entrepreneur.
“The biggest danger is the entrepreneur saying, ‘I am off to do something else’. The big question is: will the entrepreneur stick around until the business is sold? But there is no way to be certain about this before you invest; it is just one of the risks you take.

Best time to invest
“At present we have a $7 million fund and we are raising money for a $40 million fund.
I feel this is our time. We started after the dotcom crash and have done the hard yards.
“This is also the time to invest in Australian companies. You can get in at very low prices and if you take them to the US, you get 20 times the return. We are approaching another bubble and people should come along for the ride!
“There is lots of money available and it is so much easier to get three or four rounds of funding than it used to be so you don’t need to take companies to IPO.
“The biggest change we will see in the next few years is the superannuation funds investing their money in start-up emerging technologies. New growth businesses around the internet will be hot. Everyone is communicating by VoIP, on their mobiles, by internet. That all has to be monetised. And so there are going to be people who are going to make a lot of money.
“At the moment superannuation funds are all focused on buyouts but soon there will not be the deal flow for all that money. Once a few investors make millions investing in early stage, they will follow and then we’ll really have a bubble.”