The Crinia AC100 conference phone can be connected to the Ethernet for use as a VOIP telephone and is the only telephone system where the user can record the calls onto a portable USB Flash Drive. These recordings can be played back on the AC100 or stored on a computer for future reference or distributed as required. 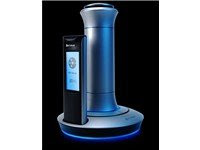 The Crinia AC100 consists of a Base Station, a Tower, a Handset and a Junction Box. The system is also provided with a portable USB Flash Drive.

The Base Station is the system’s CPU – it processes all the external connections and is the battery charger for the Tower and the Handset.

The Tower is the element of the system used for conference calls, includes a high performance speaker and four microphones.
The Handset is the system’s user interface. It’s also a cordless telephone. All the information is displayed and entered by a touch-screen LCD.

The Junction Box contains the power supply, mains and Ethernet connections and the USB Flash Drive is used to store recorded calls and plugs into the Base Station.

The Crinia AC100 can be connected directly to a telephone line or to any analogue port on a PBX.For connections to a digital PBX an interface may be required.

Crinia’s proprietary Wireless Network handles all communications between the various elements of the system, Base Station, Handset and Tower(s).

This technology was developed to cope with Crinia’s 16kHz sampling rate (twice of what is used by other conference phones), 2Mps data transmission rate instead of the normal 1Mps, low power consumption and extended operating range.