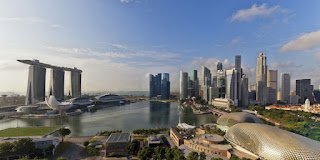 Aussie startups and established tech companies are heading to Singapore, which is vying to be one of 5 landing pads as part of the Aus governments $1.1b innovation package, which will give Aussie Startups access to mentors, investors and innovation hubs.The founder of Sydney-based Gemstar Technology, Gemma Manning, says some Australian companies can find it easier to expand by tapping into Singapore, where the government has dedicated $US1.3 billion ($A1.72 billion) to innovation. She is taking 6 companies on a trade mission to Singapore this week.

On offer are government financing and incentives to entrepreneurs looking to set up in Singapore, which ranked seventh in 2015’s Global Innovation Index. Australia was 17th.
“The funding environment in Singapore is very attractive, as is the drive for public-private partnerships. They want to commercialise technology to help drive their future income.”
One of the people going is www.progressclaim.com founder Lincoln Easton. Progress claim offers a cloud-based billing solution for building firms and their contractors.
Mr Easton, whose clients include Mirvac, says that while Australia’s R&D incentives are good, there is often too much bureaucracy involved. Australia also has a risk-adverse culture when it comes to investing in startups.
“What Malcolm Turnbull’s government is doing with new incentives to invest in startups is really exciting but in our case it has probably come a bit late.
“It’s aimed at quite early-stage companies. They shouldn’t discount people who are a bit further down the line.”