Innovation, Incubation and Venture Capital is thriving in the tiny State of Israel

Innovation, Incubation and Venture Capital is thriving in the tiny State of Israel

Innovation, Incubation and VC in Israel is alive and well. Published by Ivan Kaye 10 November 2006 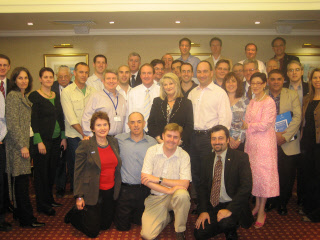 The Delegates on the Helen Coonan Delegation 5-11 November 2006
The past week in Israel on the Australian Israel Chamber of Commerce Mission headed by Helen Coonan, Minister of Communication, Technology and the Arts , has been an eye opener and a learning experience as to why Venture Capital and Overseas Investment has flourished and continues to flourish in the tiny state of Israel.

The entrepeneurial spirit, the focus on Education and Innovation, the strong links between Universities, Centres of Excellence such as the Weizman Institute, Incubation and Venture Capital and the Alignment between the Government Programs and Innovation Community has provided a WIN WIN WIN WIN

A Win for the Venture Capitalists – A rich source of deal flow that has been validated by the supply chain (the Incubator is often connected to a Venture Capitalist). This saves time on due diligence and gives the VC an opportunity to make Series A and B rounds with a fair certainty that the exit will give a decent multiple for the fund and the Investors. Israel has the 3rd most Companies listed on the NASDAQ.

A Win for Government – Entrepeneurship and Innovation drives the Economy, Increases Employment, Increases Exports and encourages Foreign Investment. The recognition of the Education and focussed Innovation has resulted in the major Conglomerates building R&D Centres of Excellence in Israel (Motorola and Intel to name a few.)
Haim Kopans of Incubator JVP Studio, which is owned by Venture Capitalist JVP said that their fund resulted in Private Coinvestment to Government of 7:1 after the 3rd year of operation, and will be a lot higher over the forthcoming years. A clear indication of the programme’s success.
EXITS

Exits through IPO’s are more difficult than before. The requirement for high profitability and growth rates which young companies have difficulty reaching, and the stringent regulatory requirements of the Sarbanes Oxley rules have made it difficult for companies to make an IPO . We are in a period that is exactly the opposite of the bubble period when you could float unstable companies which didn’t make any profit at all.

9 out of 10 exits in the US last year were through acquisition deals in which the return on investment for VC’s have been high. The reason is because the buyers are technology companies which prefer, for financial and organizational reasons, to acquire an off-balance sheet R&D activity which will not be seen in the company’s financial statements, and which will not affect the organizational character of a mature, publicly-traded company. These companies are willing to pay five times the R&D costs of start-up companies, or five times revenue, which is a great exit, and a great buy for the acquirer.

VC’s need to work with Investees to build good, profitable businesses, with revenue and proof of scalability before an exit. The VC’s who do this will get their exponential returns, but over a longer period of time says Chemi Peres of Pitango Venture Partners, who has recently raised their 4th Fund.

RETURNS
Investments in venture capital have delivered the highest profits over the long-term, compared with those in other fields: a 15-20% yield over 20 years, compared with 10% in stocks and 4-5% in bonds.
We are in a global market that is expanding continuously especially in markets such as India and China, Brazil and Eastern Europe,who have a large untapped market for technology products. This means that demand for new technologies and their products is on the rise, and one will get high premiums on technological innovation.
This bodes well for Venture Capital.

RECENT SUCCESS STORY IN ISRAEL
The sale of Passave Inc. to PMC-Sierra Inc. (Nasdaq: PMCS) for $300 million, after $13 million had been invested in it, (BRM Capital made a 20 fold yield on Passave, which returned one third of the $150 million fund) Maenashe Ezra says “we invested in Passave at the lowest point of the depression in 2002. No one wanted to invest, companies’ values were low, as were the amounts of capital that were raised. It turns out that these were the good years. A professional investor knows that you invest when prices are low, and not when they are rising. To sum up, I’m optimistic.”
Israeli companies that have become significant players, include M-Systems Flash Disk Pioneers (Nasdaq: FLSH), Amdocs (NYSE: DOX), Mercury Interactive Corp. (Pink Sheets:MERQ.PK), Comverse and others.
To put it in a Nutshell, ”Innovation and venture capital is alive and well in Israel.”