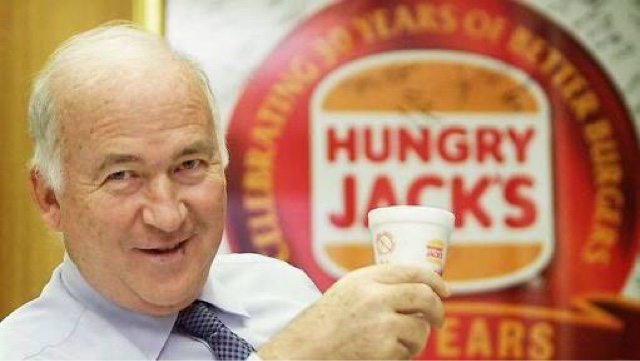 It was a queue of 50 people outside a Chinese takeaway in the Sydney suburb of Mosman on a summer night in 1968 that convinced a young Jack Cowin there was money to be made in fast food.
“You didn’t have to be Albert Einstein to see there was a need in the market that wasn’t being filled,” said Mr Cowin, the pioneer of the Australian quick service restaurant trade.
Five decades later, Cowin, now 72, has amassed a not-so-small fortune selling fried chicken, hamburgers, fries and pizza. He bought his first Kentucky Fried Chicken franchise in 1969 and founded Hungry Jack’s, the local arm of US fast food giant Burger King, two years later.
His private company, Competitive Foods, which has sales of $1.02 billion, opens its 400th Hungry Jack’s restaurant on Friday and his beef-processing and export company, Consolidated Foods, is now Australia’s fourth-largest meat processor after Coles, Woolworths and McDonald’s