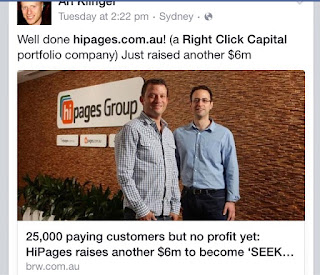 Home improvement marketplace HiPages has raised it’s second batch of $6 million inside a year, doubling down on a growth phase it hopes will see it become the ‘winner take all’ in a vertical where 99 per cent of revenue today goes elsewhere.
The new round, which takes HiPages’ total external raising to $12 million after bootstrapping for a decade from 2004, was mostly returning investors including Right Click Capital, Australian Ethical Investments and former Packer family office, Ellerston Capital. Kestrel Capital was a new investor in this round, which was advised by Right Click’s Ari Klinger, and sees Vitek and his four co-founders (including brother Michael) retain a majority stake.
The money will be spent improving “liquidity” in the marketplace, says HiPages co-founder and CEO David Vitek.
“For a localised marketplace like us, liquidity is a much bigger challenge than in that Freelancer model, where anybody anywhere can design you a logo,” he says.
“Finding a concreter in Bilgola is a completely different proposition to finding a plumber in Randwick. We have to make sure we can keep solving for both, and putting the tradie and the consumer in touch as quickly as possible.”
The recent rollout of iOs and Android apps has helped alleviate the “phone tag” problem which Vitek admits bedevilled HiPages users in its early years.
A bigger liquidity challenge to overcome is the sheer amount of Australia’s home improvement market still transacted offline, or through HiPages’ major competitor, Sensis, owner of the TrueLocal brand.
“We put together the IBISWorld figures for all the trade categories we cover and came up with an annual spend in Australia of $130 billion, with 8.9 million households averaging six home service jobs per year,” Vitek says.
HiPages brokered jobs worth $1.35 billion in the 12 months to the end of March, almost exactly a 1 per cent revenue share, at a current run rate of 60,000 new job postings a month on the platform.
Tradespeople pay a subscription for access to the HiPages platform, receiving rights to an increasing number of ‘leads’ (essentially the opportunity to be one of up to three tradies quoting on a posted job) up to a top subscription rate of $300 per month.
HiPages check applicants’ credentials upfront, an expensive challenge itself according to Vitek.
“For instance there’s totally different painters’ licence requirements just between NSW and Victoria, you wouldn’t believe how complex it is.”
It also trains tradespeople how to use its platforms, including the new apps.
No commission is charged on a completed job, at this point at least.
“We haven’t pushed monetisation too hard, it’s all about getting the customer experience right and continuing this growth phase,” says Vitek. He does not rule out applying HiPages’ marketplace systems to new verticals and geographies, but says winning a dominant position in Australian home improvement is the top priority for now.