Employees ignore everything in their resume except this!!

Home - Uncategorized - Employees ignore everything in their resume except this!!

Employees ignore everything in their resume except this!!

Don’t obsess over format and wording,
Obsessively tailoring a cover letter to such a job isn’t as important as you might think either.

As we’ve said before, job ads are mostly redundant. They describe an ideal candidate who the company doesn’t actually expect to find. In fact, if you perfectly match a job, you’re likely a bit overqualified!

No, statistically speaking, there’s one thing that matters far more than any of these so-called bits of advice:

Do you know someone at the company? A candidate with such a referral is much more likely to have their resume read, land an interview, and, ultimately, get an offer. 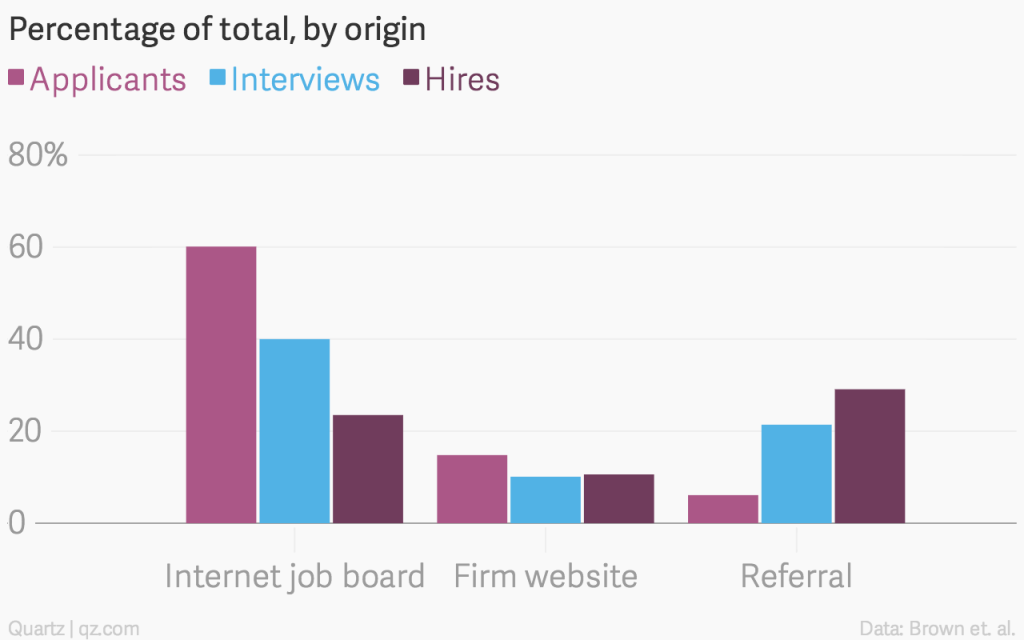 Referrals account for  between 30 and 50% of hires in the US.

In a paper published earlier this year, researchers from the Federal Reserve Bank of New York and MIT studied data from a financial services company, and found that while referrals only made up about 6% of total applications, they resulted in more than a quarter of hires. That’s more than the number hired via online job boards, even though those job hunters accounted for 60% of applications and 40% of interviews.

In fact, a referral who gets an interview has a 40% better chance of getting hired than other candidates.Another recent paper from researchers at the University of Minnesota and UC Berkeley found that these hires aren’t necessarily more skilled or smarter than other applicants. But researchers found that the referral hiring advantage exists across a big range of industries, in this case trucking, call centers, and technology.

A recent story on the phenomenon at The New York Times (paywall) found that at EY (formerly Ernst & Young) 45% of non-entry placements are referrals after an aggressive move to increase them. The figure from Deloitte is 49%. At Sodexho, referrals are 10 times more likely to be hired, reflecting research finding that lower skilled jobs tend to be even more referral-dependent.Employees are frequently incentivized with bonuses to refer people, usually with some tie to retention so they’re not passing along people who aren’t very good. It’s usually in the $1,000-$3,000 range. But the technology industry has taken things to extremes, offering upwards of $10,000. Some 70% of firms have formal programs to encourage referrals.

There’s a reason companies prefer to hire people who are referred. Such applicants have been shown repeatedly in studies  to be significantly more likely to stay at a firm for longer, and to be more productive. This might be because the workers are better matches, or because they have a pre-existing mentor or monitor in the person that helped hire them.

Referrals also come pre-vetted—to a certain extent—and cost less to find.Of course, there are down sides to the referral obsession. People overwhelmingly tend to refer those who are like themselves. A significant majority of referrals tend to be people of the same gender and race, and of a similar educational and socio-economic background. That can lead to a great deal of homogeneity in the workplace.
1
Perhaps the biggest current real-world example is Silicon Valley. Referrals are much more common in strong labor markets, and tech certainly qualifies. That has helped contribute to a workforce where some 80 plus percent of employees employees are men at the industry’s leading companies, and almost all white or Asian.

For those without the inclination to network, this can be tough news to hear. But the data is clear:
making connections pays off more than another dozen online applications.

There is not one person who should not have referron on their phone!!!