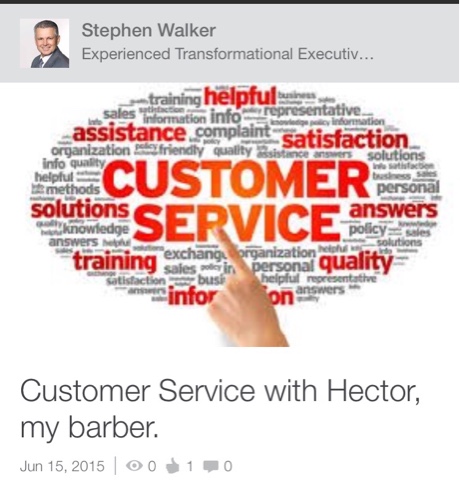 During regular visits to my barber, Hector, a Chilean-born older Australian, I get reminders of how important customer service and customer engagement is. You would think that barbers (as distinct from the fancy hairdressers my wife uses) would merely cut what there is of my hair, take the fee, and get the next customer on the seat. But Hector is different.

Hector sees people under that head of hair and makes an effort to understand them and engage with them. It may be that Hector is just a nice talkative guy, but he is also aware that this is good for business. When I arrive I greet him in his native tongue of Spanish and he gets a real kick out of that: this is my way of acknowledging his engagement with me. I even took my 5 year old grandson along for a cut and had him greet Hector in similar fashion. This is the loyalty Hector engenders.

Hector remembers the type of cut all his regular customers have, and there are many! He also remembers whether they have young children, or grandchildren, and asks how their trip went, the plans for which they had spoken about on their last visit to Hector. As salespeople we need to take great heed of this.

There have been many instances where I have stumbled over something about which a prospect or customer had previously told me and which I should have noted as being important to them even though it wasn’t important to my sales process. What I failed to understand at that time is that this point of engagement was the key, not necessarily the inherent fact or request itself.

When Hector took a holiday break to his Chile homeland he actually bought me a small gift and brought it back with him. I was surprised and humbled by this act and valued his thinking of me. In return, when Christmas came around I returned the gesture (not his gift)! How often do we provide added value to prospects and customers which are not directly tied to a sales process? Of course we should always be looking to do that, especially in these days of content marketing via social media and information bombardment. Rather than always pitching, we should be helping, knowing the interests and needs of our clients.

Hector though sometimes paid a price for his customer engagement. He had a habit of stopping cutting to emphasise a point or tell you an anecdote which raised the ire of other customers waiting for their cut. This led on more than one occasion to waiting customers walking out but Hector just apologised as they walked out the door, then continued his story. We need to also take time to understand our customers and perhaps spend more time with them instead of quickly moving onto the next target prospect. We should all know that loyalty is good for sustainable business.

I have often described customers as being like plants; they are either growing or dying, there is no steady state. For them to grow, they need nurturing and if that is lacking, they will die and move to your competitor.

I am not sure whether you noticed in the second last paragraph above that I referred to Hector as having “had” a habit: that is because he is no longer with us. A few months ago merely weeks after being diagnosed with throat cancer he passed away. He had just recently returned from another trip to Chile where he had again visited his siblings, children, and grandchildren: for that I am happy. For Hector’s passing though I am very sad but a better person for having known him: thank you Hector.