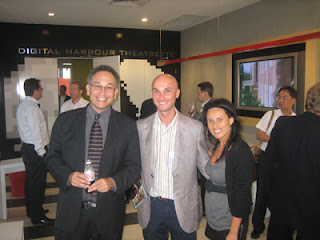 On Tuesday, 20 March 07 David Gold the Founder of dstore explained what it takes to do business in the world of Technology today.

He said a major mistake was to have a large number of investors on the board making decisions based on vested interests…. Much time was spent on accomodating investors vs running the business.

David’s skill in raising capital from investors is exceptional, starting from his success in his involvement in Looksmart, where he was involved with Business Development.

An interesting anecdote was when he was trying to get the rights of this amazing software in the USA… he set up a meeting with the CEO, and found the business run by this school kid running his business from the kitchen, with his mother ensuring that he was not being taken advantage of!

David has recently exited from Azure Wireless, creating great returns for himself and his Investors.

“In Melbourne’s Chapel Street, wireless hot spots are being established it seems within sight of every coffee machine around. It’s got a kind of Sex in the City groove about it, and David Gold, former dot.com wunderkind, is hoping its appeal will grow beyond the froth of the cappuccino and into more extensive hot zones.

Gaming – there’s a whole range of things that we just don’t envisage necessarily today that people will be using wireless broadband networks for tomorrow.

GEOFF HUTCHISON: Give me a sort of cafe-scenario five years down the track. What will it look like and what will people be able to do there?

DAVID GOLD: I think it will become a commodity, just like anything else. You know, where can you get your water and you know, like public places and you can get electricity etc, etc. And wireless Internet will just be something that’s standard in most places.