5 Power Poses to boost your confidence

5 Power Poses to boost your confidence

Harvard Business School professor and author of new book Presence, Amy Cuddy tells us about the benefits of “power-posing,” or changing your body language in ways that can make you feel more confident.
Mimicking the body language of powerful people can be more effective than traditional confidence-boosting exercises, like telling yourself how great you are, she says.
She describes power poses as expansive and open. When you adopt one, you take up a lot of space and hold your arms and legs away from your body.
Cuddy suggests that our attitudes often follow from our behaviours, as opposed to the other way around. That means assuming the body language of a powerful person can make you feel confident. On the other hand, shouting, “I’m awesome!” requires first a substantial attitude shift, which most of us know isn’t so easy to make. (this is a big thing of Tony Robbins as well)
Cuddy calls power poses  “self-nudges,” or small tweaks to your body language and mind-set that can produce psychological and behavioural improvements in the moment. She borrows the term “nudge” from economists and psychologists who discovered about a decade ago that you can spark significant behaviour changes by nudging people in the right direction.
Power-posing is an example of what Cuddy calls a “body-mind nudge.” which allow you to skip over psychological stumbling blocks, like trying to believe that you’re awesome, confident, and perfect, when you clearly don’t believe that at all — at least not right now.
Cuddy writes: “Body-mind approaches such as power posing rely on the body, which has a more primitive and direct link to the mind, to tell you you’re confident.”
What’s more, Cuddy says, adopting the body language of a powerful person changes the way other people see and act toward you, which in turn reinforces your confident behaviour.
“When our body language is confident and open,” she writes, “other people respond in kind, unconsciously reinforcing not only their perception of us but also our perception of ourselves.”
So how can you use this strategy the next time you’re faced with a challenging situation?

Check out 5 power poses that can boost your confidence

When you’re closing a deal, plant your hands on the table and lean forward. 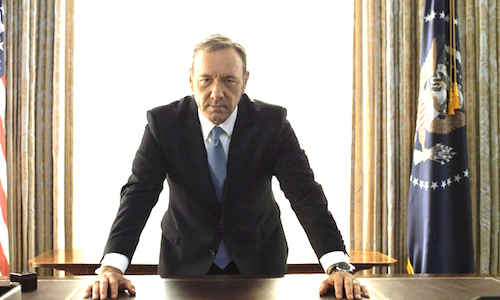 As you’re rounding the last bend of your presentation and preparing to deliver the bottom-line offer, command the room with a position Cuddy calls “The Loomer.” Leaning forward while standing shows you’re engaged and in a position of dominance.
Cuddy named this pose in tribute to Lyndon B. Johnson. “Johnson was 6’4″, and he used his stature very thoughtfully to both intimidate and seduce,” she says.
Before an interview, plant your feet widely and stretch your arms overhead in a V shape.
Striking a high-power pose in your interviewer’s office could come off as offensive, presumptive, and rude, regardless of how it makes you feel, Cuddy says. Here’s the alternative, which she calls “The Performer” in honor of Mick Jagger.
Before the interview, throw your hands in the air and widen your stance, as if you’re soaking in the applause after an encore performance. Do it in the elevator or stairwell on your way up to the office, or in the bathroom before checking in with reception. Hold the pose for two minutes to set those hormonal changes in motion and give you the confidence you need to ace the interview.
When you’re pitching an idea, rest your feet on the table, clasp your hands behind your head, and lean back. 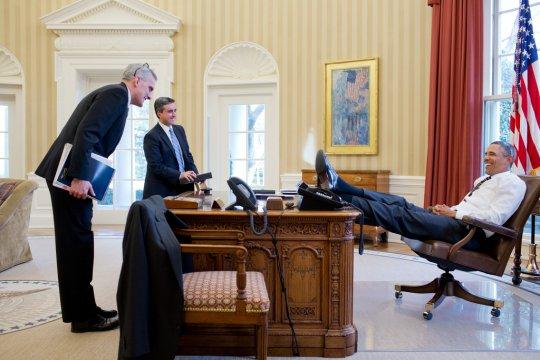 (The White House)
We call this one “The Obama,” because the commander in chief can often be seen with his feet propped up on the Oval Office desk.
This is a tough one to pull off, but Cuddy assures us that resting your feet on the desk — preferably your own — and placing your hands behind your head can lead you to take more potentially profitable risks, like saying your next Big Idea out loud.
When conducting an interview, rest your arm on the back of your chair, keep your knees apart, and recline.
“Lean in” by leaning back. It’s the perfect way to assert your confidence and comfort level when grilling a job candidate.
This less bro-y rendition of “The Obama” emphasizes opening up the body, while keeping your feet on the ground. Cuddy named it “The CEO” after seeing a photo of Oprah Winfrey looking like a total boss.
Variations include placing your hands behind your head and resting an ankle on the knee.
When talking to your boss, puff out your chest, plant your hands on your hips, and stand with feet hip-width apart. 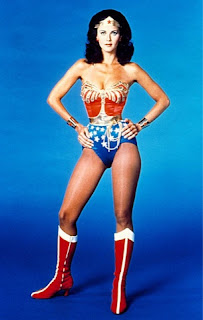 Rex features
When your boss joins you in line at the coffee machine, you may feel your heart quicken as your mind scrambles to come up with a more interesting response to “How was your weekend?”
Channel your favourite super-heroine and take what Cuddy calls “The Wonder Woman,” a classic crime-fighting pose. Tilt your chin up to maximise the power trip.
This position has the opposite effect of touching your neck, which suggests anxiety or lack of control and is considered the lowest power pose of all.
thanks to http://www.independent.co.uk/news/business/a-harvard-psychologist-says-these-simple-body-language-tweaks-can-instantly-boost-your-confidence-a6966291.html